On 8th April 1421, King Henry V presided over state business while at Howden, probably at the Bishop’s Palace.

On 8th April 1586, Sir Christopher Hilyarde, William Pailer and Hugh Bethell supervised an inquiry into concealed lands and premises in Hull. Amongst numerous premises found concealed were the “Old Schoolhouse’, a tenement occupied by the schoolmaster and the new schoolhouse.

On 8th April 1586, Sir Francis Walsingham, principal secretary to Elizabeth I, wrote to the Hull Mayor recommending Dr Hudson of York for the post of assessor in the Hull Admiralty Court. He seems to have got the job.

On 1st August 1506, William Ryplay, labourer, of Leconfield, claimed sanctuary at the church of St John, Beverley, for debt.

On 1st August 1639, Robert Skelton, 32, of Hull, was hanged at York Castle for forging a will belonging to Thomas Bell of Hull.

On 1st August 1648, Hull Recorder Francis Thorpe wrote to the Mayor concerning the shipment of pistols to the town, and about the case of Bacchus, a delinquent (i.e. a supporter of the Royalist cause in the Civil War).

On 1st August 1670, Mrs Mary Barnard of Barmston had been ordered to do work to the drain called Gallow Clow (on Myton Carr, near the road to Anlaby) on land which she owned, and had failed to carry it out; a jury under the Commissioner of Sewers gave notice of their intention to view the drain or creek.

On 1st August 1834, Richard Bethell MP laid the foundation stone for William Wilberforce’s statue on Monument Bridge, Hull, on the same day as the Slavery Abolition Act came into force.

On 1st August 1873, the Fisk Jubilee Singers arrived in Hull and visited the Wilberforce monument on the anniversary of the Abolition of Slavery Act. They performed several times, and were so popular they returned to Hull twice more before returning to the US August 1874. They were on a European tour, including singing for Queen Victoria, to raise money for the Fisk University for freed slaves. Several of the singers were born slaves. 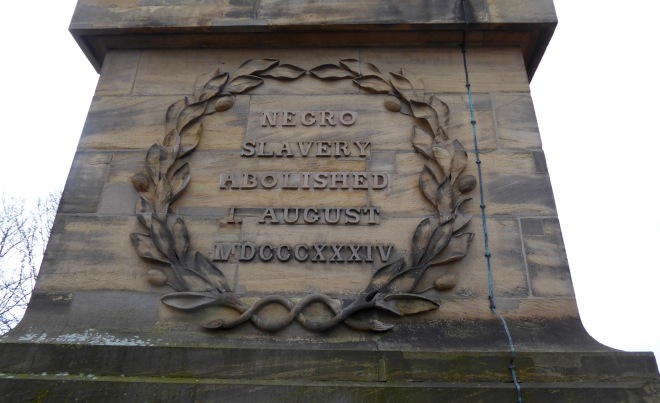 On 21st May 1801, Charlotta Bethell of Rise succeeded in getting an Act of Parliament to create the Leven Canal passed. (photo shows canal today)

On 21st May 1891, Sir Henry Cooper, physician and Mayor of Hull died aged 84. Local doctor who campaigned to improve living conditions before the cholera outbreak of 1847; urged the council to build decent homes for working people and offered to raise £2,000 himself if others would do the same.

On 21st May 1900, 4 days after the lifting of the siege of Mafeking, Hull’s Grosvenor Restaurant served a celebration menu reflecting the Boer War, with items such as ‘Kromeskies a la Baden Powell’, cod with Transvaal sauce, nonsuch tart a la Kitchener, and red, white and blue blancmange. Villagers at Nafferton celebrated the news with church bells, bands, a parade, dancing, followed by burning an effigy of Kruger stuffed with fireworks.

On 21st May 1927, English actress Kay Kendall was born at Withernsea; she died at the early age of 32, and a museum of her life was created in Withernsea Lighthouse.