On 3rd November 1947, George Cornelius (Con) O’Kelly died aged 61. He achieved gold for Great Britain in the 1908 Olympics in men’s freestyle wrestling. 12,000 people turned out to meet him when he returned to Hull.  His son, Con jnr, competed in the 1924 Olympic heavyweight boxing.

On 3rd November 1975, trawler owners ceased to use St Andrew’s Dock, Hull, which was closed to shipping after the collapse of Hull’s fishing industry.

On 15th October 1536, Hull besieged by troops of local men, from of Holderness, Cottingham, Beverley and Hullshire supporting the Pilgrimage of Grace.  William Stapleton reported he had trouble restraining the Beverley men under his command from setting fire to shipping in Hull haven. He sentenced 2 ‘unmanageable’ followers to death, but reprieved both after inflicting one with the punishment of being towed behind a boat by a rope attached to his waist.

On 12th October 1536, 9,000 armed men from across East Yorkshire mustered on Market Weighton Hill as part of the Pilgrimage of Grace. Robert Aske led one group to York via Pocklington, and William Stapleton led a march on Hull, besieged it and captured it for the rebels. Holderness gentry Sir John Constable, Sir Wm Constable and Sir Ralph Ellerker had taken refuge in the town from the revolt.

On 12th October 1643, the Earl of Newcastle abandoned the 2ndsiege of Hull after 5 weeks and withdrew Royalist forces to York. To prevent pursuit, the Royalists destroyed bridges and roads and cut the banks of waterways as they retreated. The date was observed as a day of public thanksgiving in Hull until the Restoration.

On 12th October 1697, Robert Pattinson, Humber pilot, was fined 30shillings for damaging the ‘dolphin’ at the entrance to the River Hull while handling a vessel entering the Haven.

On 12th October 1767, Beverley gentleman John Courtney reported in his diary seeing a firework display for the first time, in the Market Place, paid for by subscription.

On 12th October 1896, at Hull Fair, one of the attrractions was the first showing in Hull of moving pictures, only 8 months after Louis Lumiere’s first performance, included scenes of Whitefriargate, the W’force Monument, the Corporation Pier, the Humber Ferry.

On 8th October 1536, Beverley men mustered on Westwood Low Green in response to the Lincolnshire rebellion against the Act of Dissolution. Elizabeth Stapleton encouraged them, despite the reluctance of her husband, and her brother-in–law William Stapleton became the rebels’ captain.

On 8th October 1643, Capt Strickland led a failed Royalist attack on Hull’s Hessle Gate, and was shot dead. Many of the attackers were killed.

On 8th October 1708, William Robinson died in Hull. Former Sheriff of Hull, donor of a hospital to Trinity House, left bread for 12 widows to be given each year on Christmas Day. They were required to go to his grave in Holy Trinity churchyard to receive their dole.

On 8th October 1805, Beverley corporation ordered that all rogues and vagabonds found wandering in the town must be apprehended and conveyed to a magistrate. A board  showing this order can be seen in St Mary’s church loft.

On 8th October 1862, Hornsea businessman Joseph Armytage Wade turned the first sod with a silver trowel at a ceremony to mark the start of building the Hull to Hornsea Railway.

On 8th October 1874, George Wombwell visited Beverley on his way to Hull Fair; in Saturday Market he exhibited elephants, giraffes, a rhino, and big cats; other shows also stopped over in the town before going to Hull.

On 8th October 1929, Wm Jackson & Son Ltd opened their landmark store in Paragon Street, Hull, designed by Hull architects Gelder and Kitchen, with a cafeteria and restaurant on the first floor. After the war, when the fire-damaged property was repaired, a 3rd floor was added as a ballroom. This was to become one of the city’s most popular night-spots for many years.

On 23rd July 1525, carpenter John Algood of Wheldrake claimed sanctuary at the church of St John, Beverley, for debt.

On 23rd July 1856, Capt Bryan Stapleton became the first governor of the Yorkshire Catholic Reformatory School for Boys, at Holme on Spalding Moor.  The reformatory movement campaigned to keep children out of prisons, but the first Yorkshire school was Church of England only.

On 23rd July 2012, the Royal Engineers carried out 15 controlled explosions on the beach at Mappleton, after a landslide (on Sat 21.7) revealed at least 1,000 rockets, grenades and bombs from WW2. 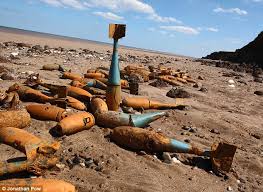