On 2nd August 1806, Capt Welburn, James Simon, ship’s surgeon, and crew of Hull whaler Blenheim were returning from the Davis Straits when the ship was taken by 2 French frigates, L’Syrene and Le Revenge. The Blenheim was burnt, its crew landed at Pampoule near St Malo, and conveyed to Arras where they were imprisoned. They were later moved to other prisons, and only released in 1814, after years of privation and misery, when the allies entered Paris. Dr Simon was subsequently in practice in Aldborough, Holderness where he died in 1845.

On 2nd August 1860, Hedon Magdalen Fair was finally abolished; in the latter years the owner of the field had to persuade, or bribe, those who wished to attend the fair not to meet there. The event had included a market, music, games, sports, juggling, fire-eaters, and badger baiting.

On 2nd August 1913, Charles William Loten and Terence Charles Carroll, 18, died at Hornsea whilst trying to save a child from drowning. A memorial brass in Hornsea church was paid for by public subscription.

On 2nd August 1916, Joseph Bennett, 17,  died in Hull from bubonic plague. photo shows his memorial in the columbarium, Hedon Road. 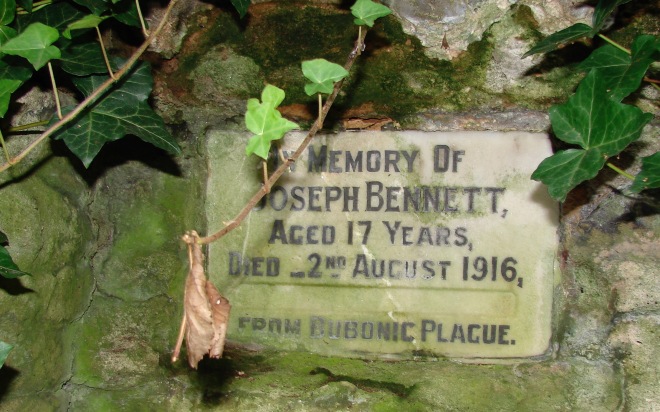