On 19th July 1692, Elizabeth Howe, nee Jackson, aged 57,  was hanged for witchcraft at Salem, Massachusetts with 4 other women; at the age of 3, she was among the Puritans who emigrated from Rowley to found Rowley, Massachusetts.

On 19th July 1750, Hull soldier John Hasselbe made a sworn statement to John Wood, Deputy Mayor, that when he was on duty at Beverley Gate between 1.00 and 3.00, his musket went missing, and he suspected it had been stolen and concealed.

On 19th July 1783, Christopher Atkinson, MP for Hedon & corn factor, was tried in London for perjury, found guilty and committed to prison for 12 months, , first being pilloried at the Corn Exchange, London, and expelled from the House of Commons.  He resigned from his commercial post, but stood again as MP for Hedon in 1796 and 1802 and was elected. He later changed his name to Saville. picture shows Atkinson at the pillory

On 19th July 1786, Hull’s Rev George Lambert visited several sick parishioners, and commented on the contemporary habit of family and friends crowding into the room with the minister, so that the sick person was unable to speak openly.

On 19th July 1794, Edward Bogg, carpenter’s mate,  was shot and killed on board Hull fishing vessel Sarah and Elizabeth Off St Abb’s Head by the crew of a naval press gang on the frigate Aurora; 3 other crew were injured; the coroner’s court returned a verdict of wilful murder by Captain Essington; the captain was sent to the East Indies for several years and never stood trial.

On 19th July 1849, an All England Eleven cricket team played a 30-day match against a Hull amateur side at the Hull Athenaeum Club ground, Anlaby Road. Despite funding from the Hull Sheriff and both MPs, the entrance fee was 1s a day. The professionals won by an innings and 82 runs. 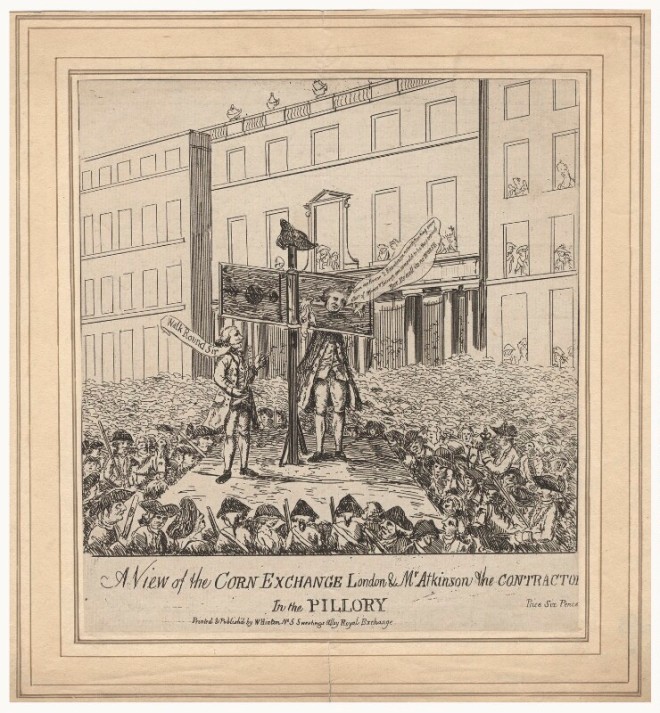