On 18th July 1642, the first Hull siege ended after 17 days; as the Royalists withdrew to Beverley, they destroyed the sluice at Hull Bank, causing flooding in Newland, and probably set fire to St Andrew’s Church at Paull.

On 18th July 1833, the work of the Humber Pilots involved more than directing ships into harbour; the day’s work included: relaying 14 buoys; taking carpenters to Bull Float and relaying Transport buoy (at the entrance of the River Hull).

On 18th July 1878, Anthony Bannister JP died at Hessle aged 61; twice Sheriff and twice Mayor of Hull, Vice commodore of the Royal Yorkshire Yacht Club. Promoted the Hull to Withernsea rail line; he is commemorated by a street in Withernsea, by a statue in Hull, and an effigy in Hessle.

On 18th July 1929, Boothferry Bridge opened to traffic across the River Ouse, replacing the ferry which had operated there since the 14thcentury.

On 18th July 1941, Ernest Dean Hodgson of Deepdale Grove, Hull, member of the Rescue Service, was commended for the rescue of Mrs Pounder and her 3 children from a damaged air raid shelter in rustenburg St. For their actions on the same night, John Joseph McHugh of Lilly Grove, and Arthur George Dixon were both awarded the British Empire Medal.  The same raid caused major damage to Reckitt’s Dansom Lane HQ, about 75% of the buildings being destroyed. 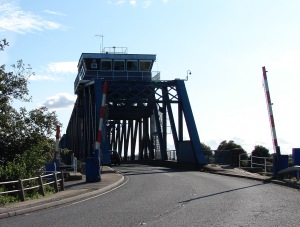