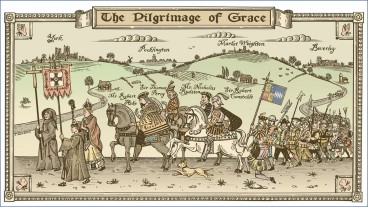 On 18th February 1537, Sir Francis Bigod entered Beverley with 3-400 men on the renewed Pilgrimage of Grace.

On 18th February 1620, The King’s Players performed 5 plays at Londesborough House over a 4-day period at Shrovetide, for the Earl and Countess of Cumberland. The Cliffords regularly had entertainment at the house, hosting 13 different companies of players, and many musicians. Shakespeare had been the company’s leading playwright (he died in 1613).

On 18th February 1657, Sir Henry Slingsby, a Royalist prisoner in the Hull blockhouse, attempted to bribe Captain John Overton and incite the soldiers to go over to the King. Ralph Waterhouse, commander of the South Blockhouse, was also approached by Slingsby, who said that King Charles had offered him a commission, and said 600 men were at Paull ready to march into Hull. Slingsby was executed in 1658.

On 18th February 1786,  Elizabeth Dearing, aged 20, died in Fitling, cause unknown. She was the 3rdgeneration of the Dearing family to be recorded in the Humbleton parish register as Papist. Later generations who died there are not so described.

On 18th February 1945, Thomas Sheppard died aged 68 in Hull. He was a self-taught geologist, archaeologist and prolific author. He devoted 40 years of his life to Hull’s museums, abolished admission charges in 1902 and increased visitors to 2,000 per week. (born 2.10.1876 in South Ferriby) see photo 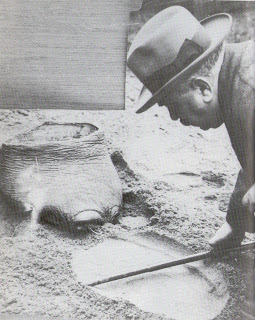