On 14th April 1511, Walter Rugbe of Paull, a cooper, claimed sanctuary at the church of St John, Beverley, for the murder of mariner Anthony Dowre of Boulogne.

On 14th April 1524, Sir Robert Constable of Flamborough, with 100 men, attacked the Rokebys’ manor house in Bishop Burton and abducted Ann Cresacre in a complex dispute over land and marriage agreements. Ann was 12 yearsold and an orphan. The case was heard in the Star Chamber. Ann eventually married the son of Sir Thomas More.  A descendant was the City Architect of Hull, Joseph Hirst. photo shows Holbein’s study for his picture of the More family – Ann is standing, rear.

On 14th April 1571, William Strickland of Boynton, MP, a leading Puritan, presented a Bill  to Parliament to reform the prayer book, including abolishing confirmation and the wearing of priests’ vestments.

On 14th April 1702, Jeremiah Northend was buried, aged 78 in Rowley. Aged 14, he had emigrated to Massachusetts with his Uncle Robert and cousin Ezekiel, with the dissenting community led by Rev Ezekiel Rogers, but returned home after about 9 years. Lived in Little Weighton. (b 26.9.1624). 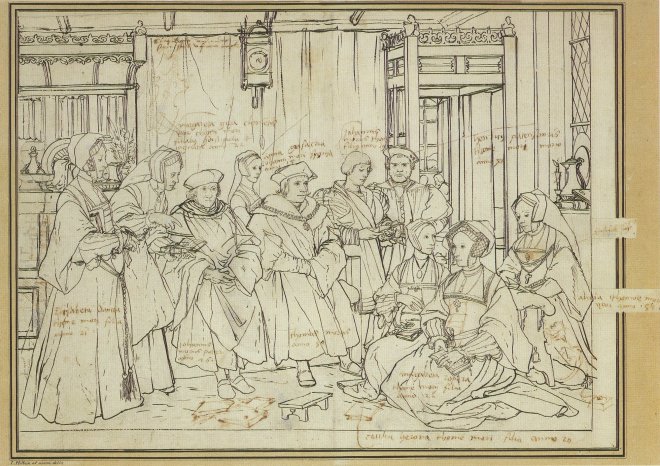